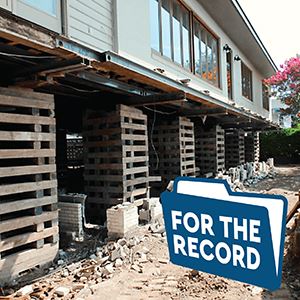 Hampton has been awarded more than $11 million dollars over the past five years from the federal and state governments to help homeowners elevate homes that have seen repeated flooding and are expected to see more in the future. For the record, the program is set up to save the federal government money by reducing future flood insurance claims. If the Federal Emergency Management Agency determines that the cost of elevating the home is less than the projected amount of future flooding claims over the next 30 years, the project is deemed eligible.

It's a voluntary program, and homeowners have to fill out applications. The process is slow; some homes are on the list for five years before the elevation actually happens. Homeowners may be responsible for up to 25 percent of the cost, plus temporary relocation.

A: The program prioritizes homes that have had repeat flooding damage claims through the National Flood Insurance Program. Letters are generally sent to homeowners in the fall. If you think you might qualify, contact the Emergency Management staff at 727-1208.

Q: Where does the money come from?

A: There are two programs. One is the flood mitigation assistance grants. In those, the federal government pays between 90 and 100 percent of the cost, if the structures are classified by FEMA as repetitive loss or severe repetitive loss properties.

The other is the Hazard Mitigation Grant Program, which becomes available from disaster relief funds allocated to any federally declared disaster in the state. (One of Hampton's grants is linked to flooding from Hurricane Irene.) In that program, the federal government pays 75 percent of the cost. Historically, the state (often through undesignated FEMA funds) has paid 20 percent, and the homeowner pays 5 percent, but this is not guaranteed.

Homeowners may face other costs as well, such as finding a temporary place to live, pre-existing home conditions and some unanticipated problems.

Q: What are the city's costs?

A: The other sources cover most of the actual outside work, but the city covers all the administrative costs. City staff write the grants; figure the FEMA cost-benefit analysis; write scope of work documents; request and evaluate bids; meet with homeowners, engineers, construction crews; pay bills; document the work; and deal with the inevitable problems. Emergency Management estimates it's taking the equivalent of 1½ full-time employees.

Q: How much does elevation cost?

Q: How could it possibly cost so much?

A: It takes a lot of engineering studies, and it's a specialized and complicated process. Very few companies have bid on the work. The companies that do tend to bid on this type of work are commercial companies rather than residential contractors. Federal regulations require companies to have a high level of insurance and bonding to reduce risk, and that increases costs for the contractors.

Economies of scale also come into play. It is far less expensive in a disaster region for contractors to move into an area and elevate a large number of homes in a neighborhood than to move equipment over large distances and supervise a handful of work sites that are spread through the city.

Sometimes the rules change along the way: Hampton had to seek additional funds and go back out to bid when the federal government updated the city's flood maps and when the city began to require a higher first-floor elevation for new construction and major renovations in low-lying areas. As anyone who has ever had a contractor do renovations (or watched home improvement TV shows) knows, it's pretty common for unforeseen problems to be discovered — and add expense to the project.

Q: Isn't that more than the cost of the home?

A: It's more than the cost of some of the homes. Home value is not considered in the FEMA criteria, and neither is homeowner income or ability to pay. It's all based on the flood insurance future claim estimate vs. the estimated cost of elevation.

Q: How does the city decide which homes to use for the grants?

A: There are really two factors:

Q: If these homes flood repeatedly, why doesn't the government just buy them?

A: Most can successfully be elevated, protecting the home and contents from flooding. (Residents still need to evacuate during major storms, as the area under the house still floods and access to the home may be cut off.)

Plus, buying the home would shift some costs to city taxpayers. If FEMA pays for the home at market value and demolishes it, nothing can be built there, ever. The city would own the lot and taxpayers would pay to maintain it in perpetuity. Using the grass-cutting estimate for code violations ballparks the cost of mowing each lot at about $750 per year. That's $22,500 over the 30-year time frame used for the estimates. As there are now 36 homes in the program — and more waiting to get in — that ongoing city taxpayer cost grows.

Q: Isn't there a better way of managing flood-prone areas?

A: We hope so. Hampton has engaged a firm to help us rethink the water around us, following a process called the "Dutch Dialogues." The concept — pioneered by the Netherlands government and some businesses — is to rethink how we live with the water. There are a variety of options, including elevating roads and adding floodgates, but most plans recognize that a part of the solution is creating areas that can safely flood.

Conceptually, the city could designate certain areas along waterways that frequently flood as places that could be returned to a more natural state with native vegetation. They would be designed to help hold and treat storm- and flood-waters. The problem is that those areas are already full of homes and families. Even if those owners agreed to move, it would be very expensive to buy and demolish those homes with city taxpayer funds.

Right now, the FEMA grants aren't set up to be used that way. Every home is considered individually, based on the federal cost-benefit analysis. There's not really a way to group an entire street or area together. Some homes along the street may have already been elevated, after Isabel or another storm. Some may be new construction, built above the flood elevation. The FEMA program is strictly voluntary, and only homeowners who want in are considered.

Q: Why is the city even doing this?

A: Hampton officials wanted to help as many local homeowners as possible. Staff members have been working on this program for five years to try to get our fair share of the federal money. However, with any federal program, Hampton is tied to the established criteria and procedures. Many other cities in the region are also working on the elevation mitigation projects. However, Virginia Beach officials decided to stop participating in the process. In a column dated June 21, 2017, Councilman Jim Wood told Virginian Pilot columnist Roger Chesley, "It is a dreadfully burdensome process that is extraordinarily expensive and cumbersome."

Hampton officials acknowledge that it's a flawed program; however, at the moment, it's the only federal or state program that offers assistance to homeowners facing frequent flooding damages.