Sighting of coyotes have increased 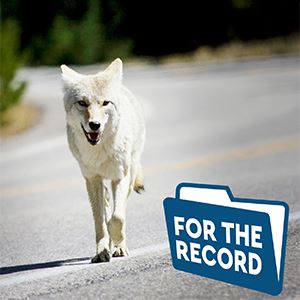 Coyotes have been in Hampton Roads for years. However, there's been an uptick in sightings lately, and some residents are worried. For the record, coyotes provide some benefits. They eat rats, raccoons and other small mammals – critters we've also been seeing a lot. Still, they're a potential danger to our small mammals, and residents should be careful about small dogs and cats outside unattended at dusk or overnight.

Coyotes weigh 15-35 pounds, are variations of gray, brown, white and black, and are often mistaken for a dog or small wolf. Coyotes generally are not a danger to humans. Hampton's Animal Control staff is not allowed to trap or capture coyotes or other wild animals, unless an animal is sick or injured. There are private trappers licensed by the state who residents can hire.

If you see a coyote, keep your distance. Make noise to scare it away so it doesn't get used to humans.

Q: How many are here?

A: We don't know. It's likely that we've seen only a fraction of the coyotes who live here, because they are reclusive. Most of the 15 or so sightings a year reported to Animal Control are in the northeast section of the city — Howe Farms, Fox Hill, Beach Road, Old Buckroe Road. However, the department has logged reports of coyotes in Wythe; along Briarfield Road; off Todds Lane; and in Old North Hampton. Professionals have definitively identified coyotes on Langley Air Force Base (2006) and in Grandview (2013). A story in the Virginian-Pilot in December 2017 estimated that "hundreds" are living in Hampton Roads.

Q: What should I do if I see a coyote?

Don't panic. As Police Chief Terry Sult recently told City Council: "We're talking about precautionary measures. They typically avoid humans at all costs. Leave them alone, and they're going to leave you alone. We don't know of any attacks on humans, certainly in Hampton, but even in a broader area."

Q: How can I get rid of them or prevent them from coming?

A: Restrict food. Cover your trash. Don't put meat scraps in compost and keep it covered. Leash your pets. Bring your cats inside at night. Don't feed feral cats or wildlife; that food can attract coyotes. You might turn a hose on them, or have motion-sensor sprinklers.

Q: Coyotes aren't native to this area. How did they get here?

A: They are native to the Great Plains but expanded their territory as wolves, their natural predators, were killed and their population grew. The eastern coyotes may have mated with some wolves as they moved eastward.

Q: How do they survive in urban areas?

A: They are adaptable and smart. In urban areas, they've broadened their diet to include garbage, fruit, pet food or other food left outside. They live in parks, near water, or treed areas. They travel as a pack – usually a breeding pair, often including offspring. They are reclusive, which is why people don't always see them, and hunt primarily at night.

Q: What are their predators?

A: In the wild, wolves. However, there are almost no wolves in Virginia. Humans are now the biggest threat, from trappers or auto accidents.

Q: How can their population be controlled?

A: It's actually difficult. For one thing, when the population is aggressively controlled through hunting or trapping, coyotes increase their birthrate; they breed earlier and have more young in a litter. Populations have bounced back quickly, even when up to 70 percent of the population is removed.

Q: Can they be relocated?

A: No. For one thing, their range is generally 2-4 miles, but it can be up to 24 square miles. For another, they are very difficult to trap. Live traps seldom work. Leg traps are the most common; they cause damage, and the animal has to be euthanized.

Q: Where can I get more information?

A: Here are some resources: