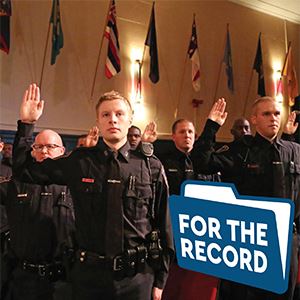 Hampton City Manager Mary Bunting's proposed budget adds funding in three key areas: fighting crime, boosting education and supporting employees. It does that without a tax increase by using cost-saving measures totaling more than $1 million to balance the budget in a tight year.

For the record, Bunting proposed a FY19 budget that totals $471 million, an increase of just 0.71 percent. Of that, 43 percent will go to the school system and 57 percent will go towards city and all other expenses.

Bunting addressed the citizen priorities, noting that some spending increases were proposed in the annual operating budget. Others were in an expanded, five-year capital improvement plan that contains strategic priority projects designed to stimulate economic growth and improve quality of life.

The proposed budget is available online and in libraries. There will be two public hearings before Council votes May 9.

Q: What are the additions to fight crime?

A: The city added 12 officers to the streets in the past two years. Since some were initially grant-funded, there are budget increases as some of those costs shift into the budget over time. The additions for FY19 will be a team of three crime analysts to both prevent crimes and enhance evidence for prosecution. Speaking of prosecution, there are also additional positions for the Commonwealth's Attorney's office. For prevention, there is additional money for more streetlights, the third year of increased funding.

Q: How would the budget boost education?

A: This year's growth in residential taxes will increase recurring school funding by $705,626 for FY19. The recommended budget also includes an additional $350,000 in one-time funding above the funding formula to support the new investments needed for equipping the College and Career Academies.

As the City Manager notes in her budget message: "This increase in annual operating budget brings the city to a historic funding level for our city schools. In FY19, the City's operating budget contribution is $73,827,042 (including the $350,000 in one-time funding). That is more than double the required local contribution as determined by the state funding formula. While all localities in Virginia go beyond the state required amounts, this is the first time that Hampton's amount has crossed the threshold of providing more than twice the amount of required funding, which is a reflection of our strong commitment to our schools."

A: There are proposed raises of 2 percent for eligible full-time and part-time staff. Bunting noted that this was in line with what most localities in the region were proposing this year. She also noted that the funding for Hampton City Schools would allow 2 percent raises for their staff as well.

Q: So, if growth is still slow and there are no tax increases, how were these three initiatives funded?

A: Cuts. A voluntary retirement package is expected to save more than $400,000, some through position eliminations and some through replacing people at lower salaries. A few positions were eliminated or frozen, and some departmental budgets saw cuts to reach more than $1 million in savings.

Q: Aren't there other investments and spending?

Many of the city's investments are designed to bring returns by growing the tax base and economic activity, while improvements to quality of life and education should draw new residents.

"We are taking steps to grow our tax base and a better future for our community," noted Bunting when she introduced the recommended budget April 11. "I firmly believe that our residents, businesses, staff and elected officials have clearly demonstrated that, working together, we can overcome our challenges and chart a bright future for the City of Hampton."

Q: Where can I see the full budget?

A: You can read it or download it at Budget Office. (The information is by section because of the large file size.) If you prefer a print version, there are copies in all the city's library branches.

Q: What were the citizen priorities?

A: Of the more than 600 people who participated during input for the city's "I Value" survey, most residents were happy with the services they receive. The proposed budget responds to the areas that a majority of "I Value" participants said they wanted to see more spending: Public schools; streets and bridges; drainage; attracting new businesses; reducing blight; and police uniform patrol. (Some are in the annual operating budget, but others are included in the five-year Capital Improvement Plan.)

Q: What happens next?

A: There are two public hearings, at the April 25 and May 2 City Council meetings. The meetings start at 6:30 p.m. in Council Chambers at City Hall, 22 Lincoln Street You can watch them on Hampton TV (Channel 47 for Cox and 22 for Verizon Fios) or stream at Hampton Television. You can also give input to all members of City Council by emailing