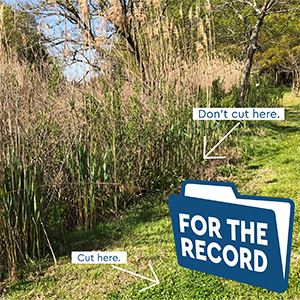 The city of Hampton requires you to cut the grass in your yard, as well as in the adjacent city right-of-way. Except when we don’t want you to.

For the record, here are the rules: Don’t let the grass (or weeds) in your yard get higher than 8 inches tall. You are also responsible for cutting grass on the city right-of-way that is next to your property — the part right up to the street or the midway point of an adjacent alley. What shouldn’t you cut? Stormwater ditches. Wetlands. Also undeveloped areas in the Chesapeake Bay protection areas. Those grasses — and even weeds — help hold and filter water.

Q: Why shouldn’t we cut the grasses or weeds in the ditch?

A: The roots on the grasses or weeds in the ditch hold the dirt in place, keeping it out of the ditch and the waterway. If you trim the grass down to the dirt, it will erode. As dirt, or sediment, flows into the ditches, it can settle and fill in the ditch. It won’t hold as much water. Or it can settle and fill in the retaining pond, so that won’t hold as much water. Also, plant roots help absorb water and allow the soil to slow the runoff and better filter pollutants before the water runs off.

Q: Why does the city care how high my grass is? It’s none of their business.

A: In an urban area, what you do on your property can cause problems for your neighbors. Tall grass and weeds can be an attractive habitat for mice and rats, which can cause health issues.

"It shall be unlawful for the owner of any land, or any occupant or other person who is responsible for the maintenance and upkeep of any land, occupied or vacant including the area adjoining such property extending to the curb line or the paved portion of the roadway and or the center line of an abutting alley, to permit grass, weeds and other foreign growth on such property to exceed a height of eight (8) inches, within one hundred fifty (150) feet of any residential or commercial structure, or any structure designed for use in connection therewith."

Q: Why should I cut the grass on land owned by the city?

A: It costs much, much less. For the strip between the sidewalk and curb, for example, it’s an extra minute or two for someone already cutting the adjacent area. Even though it’s technically the city’s land, the homeowner has the use of it. To send a crew out to those small pieces of land all over the city would be cost-prohibitive to taxpayers. Plus, it keeps the yards looking nicer. It’s a part of doing your share for your community. And it’s the law.

Q: Do I really have to cut the alleyway?

A: If it needs it. Some of our older neighborhoods have alleys that are used, so there isn’t much cutting to do. Others are more overgrown. It may be a case of knocking back some tall weeds with a weed-eater rather than a mower.

A: The city will step in and cut it, but it will cost you. There’s a minimum fee of $50 for the actual grass cutting and weed-eating, but also a $150 administrative fee. That helps cover the cost of sending out inspectors, mailing notices and repeat tracking of those who violate the ordinance, so that the violators are footing that bill rather than their neighbors. (Those fees are in line with neighboring localities, by the way.)

Q: What if homeowners don’t pay?

A: They have to, eventually. The city will place a lien on the property. So if the bill isn’t paid, the taxpayers get their money back when the property is sold.

Q: Will I get a warning before the city steps in?

A: Yes, at least if you are the owner of the property. A notice of violation will be mailed to the address on record, the same place tax bills are mailed.

Q: Does this happen each time someone’s grass gets too high?

A: Once per season. The city used to have to send notices out each time grass got too high, as frequently as every two weeks for properties that had been abandoned. That was very costly, and the law was changed to require only one notice per season, which runs from about March to November.

A: The ordinance used to read "to a reasonable height," but people had different interpretations of what that means. It doesn’t mean that there’s one really tall weed, but that much of the yard has reached that height.

Q: What can I do if my neighbor’s yard is a mess of tall grass and weeds?

A: First, you might try talking to your neighbor and see if he or she needs help. Maybe there’s a family or medical issue that is causing a temporary hardship. But if this is an ongoing problem, you can call 311 (727-8311 from a landline) or email 311@hampton.gov and report the problem, and the city can send out an inspector.

Q: There’s a house in my neighborhood that also has overgrown shrubs or trees in front of the house. Can the city also require those to be cut back?

A: No. City officials have looked at the issue and considered regulations and, while the city can require property owners to cut grass, weeds, and other "foreign growth," it does not have express authority to regulate overgrown shrubs, even when they are unsightly. Hampton has consistently included a request for additional authority pertaining to this issue in its General Assembly Legislative Agenda in recent years. Unfortunately, due to questions concerning how to determine what constitutes an "overgrown" shrub and enforcement of the code, the proposed bills have not advanced.

Q: I see grass on city property that gets taller than that. What about the city following its own rules?

A: We mostly do. However, as we’ve researched many of the complaints, they are about natural areas in wetlands or the Chesapeake Bay preservation area. Those natural grasses can get pretty high, but in that case the more important purpose — protecting the health of the bay — trumps the issues of unsightliness and vermin. Those areas also provide a habitat for the native wildlife that are supposed to be living there.