Testing the waters, for safety 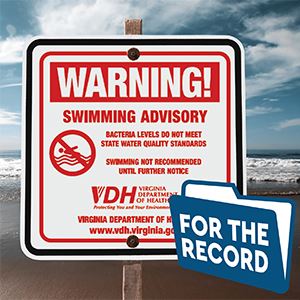 Weekly water tests are performed at Hampton's public beaches to ensure that they meet the state water quality standards for swimming. For the record, the public will only know the results if there's a problem. If high levels of bacteria are found, the Hampton Health Department will issue a swimming advisory for that beach, which advises the public not to swim because of the increased risk of developing gastrointestinal illnesses. If an advisory is issued, the department collects new samples and monitors the water until the conditions return to safe levels.

Q: Where are the samples taken?

A: There are five locations in Hampton: Fort Monroe's Outlook Beach; three spots along Buckroe Beach; and Salt Ponds Beach. Buckroe is segmented, so bacteria levels could affect the entire area, or just a portion (the south, from the pier to Point Comfort Avenue; middle, from Point Comfort to Tappan avenues; or north, from Tappan to Pilot avenues.)

Q: How will I know if there's an advisory issued?

A: The Health Department will place signs in the affected area, generally near the life guard stands. They will be removed when the advisory is lifted. They will also issue a news release, so it's likely the media will report the advisory. The city will post a notice on Hampton.gov/topnews when there is a swimming advisory.

Q: What does the test show?

A: Water samples are sent to labs to detect Enterococci in salt water. While these organisms themselves do not cause illness, their presence is an indicator that there is fecal contamination and other harder-to-detect bacteria are present.

Q: What is the timing?

A: The Health Department tests water weekly during the peak swimming season, from mid-May to mid-September. Water samples are usually taken on Tuesdays, with results available to the public by Thursday morning. If there are indications of high levels of bacteria, the staff will take new samples until samples show acceptable results.

Q: What causes the contamination, and what is done about it?

A: When the city is notified of contaminated water, officials begin looking for a cause. Most commonly, bacteria levels can increase after a major storm, when sewer or wastewater systems could become overwhelmed and have overflows. Bacteria also could be caused by a leak in one of the systems.

Q: Is the beach closed?

A: No. An advisory doesn't close the water to swimmers — it just warns you that you face elevated risk. The risk is especially elevated for children, who are more likely to swallow the water, or those who have open wounds or weakened immune systems.

Q: What about other water quality problems?

A: The State Health Commissioner does have the authority to close beaches, but it's rare. It is generally only if there is a present threat, such as a chemical spill or toxic substance or harmful algal blooms.

Q: Is there a safe level of bacteria?

A: Health Department officials will tell you there's never a guarantee of safety when swimming in natural waters. However, they follow an Environmental Protection Agency standard that sets the unacceptable level at the point where people show a greater incidence of illness.

Q: How can I minimize my risk?

A: Don't swim if there is an advisory; if the water looks stagnant, muddy or smells unpleasant; if there are dead fish; right after a major storm; and if you have an open wound or weak immune system. Don't swallow the water. Shower with soap after swimming. Don't add to the problem; make sure you dispose of pet waste, trash and dirty diapers responsibly.

Q: How can I check to see if an advisory has been issued outside of Hampton?

A: The Virginia Health Department keeps a current map that shows all advisories in coastal Virginia.