City shows it takes care of its business 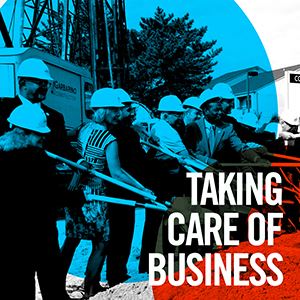 Mayor Donnie Tuck addressed a sold-out Chamber of Commerce luncheon Tuesday, Nov. 13, 2018, telling attendees that Hampton takes care of business "by being attuned to the needs of our businesses, our partners and our residents." The Chamber sponsors the annual State of the City luncheon, at which the mayor highlighted some of the city's successes over the past year. City Manager Mary Bunting and Superintendent Jeffery Smith also highlighted the city schools' success, particularly the state and national attention that the Academies program has earned.

Mostly, though, the mayor struck a personal tone, citing the partnerships and close working relationships that define Hampton: Meetings like the Mayor's Business Roundtable; Hospitality Huddles; functional teams with city staff, businesses and residents to work through issues; and town halls.

Among this year's successes were larger companies like Maximus and WPS, which have grown beyond projections and helped boost wages in their sector; independent entrepreneurs like NASA engineer Brian Stewart, using his material-science background to create a better compression and ice barrier for youth sports injuries, and developing it in conjunction with nonprofit VersAbility; booming growth in Phoebus; and continuing development at federal facilities.

The city has had a role in redevelopment, Tuck said, though that is not without its share of controversy. "To grow, we have to redevelop. To redevelop, we often have to buy a property, tear down what was there, and then take it off the tax rolls (hopefully for just a short time)."

This year, some of that land is ready to move back onto the tax rolls as major projects, Tuck said. He cited Monroe Gates, a luxury apartment complex in Phoebus, as well as plans for a 5-story apartment building on Settlers Landing Road with commercial space on the ground floor. Also, he added, a 7-acre parcel that housed the Quality Inn on Coliseum Drive will become available for redevelopment.

Next year, Tuck said, Hampton will be noted nationally for the commemoration of the 400th anniversary of the arrival of the first Africans in English North America at what is now Fort Monroe. There will be new galleries that will tell that story, as well as the story of the first "contrabands" — black men and women who escaped to Fort Monroe during the Civil War — and the beginning of emancipation.

Hampton isn't just the city government, Tuck said. It's all of us: "It's everyone in this room and many, many more: people who work, live, visit, invest, learn, play, and innovate in this community every day."